MSI Afterburner without MSI support, “The project is most likely dead”

The MSI Afterburner project is having a hard time

Alexey “Unwinder” Nicolaychuk has confirmed that the Afterburner project may be dead.

The most popular overclocker for modern graphics cards is facing licensing issues due to the ongoing war in Ukraine. Because of the sanctions, companies like MSI cannot perform their obligations under the agreement signed with the developer. Alexey, who is based in Russia, is now continuing the project without MSI’s support.

The developer confirmed that the project has been stalled for over 11 months now. The current political situation, he explains, prevents MSI from fulfilling its obligations. The project is now supported by Alexey only during his free time. 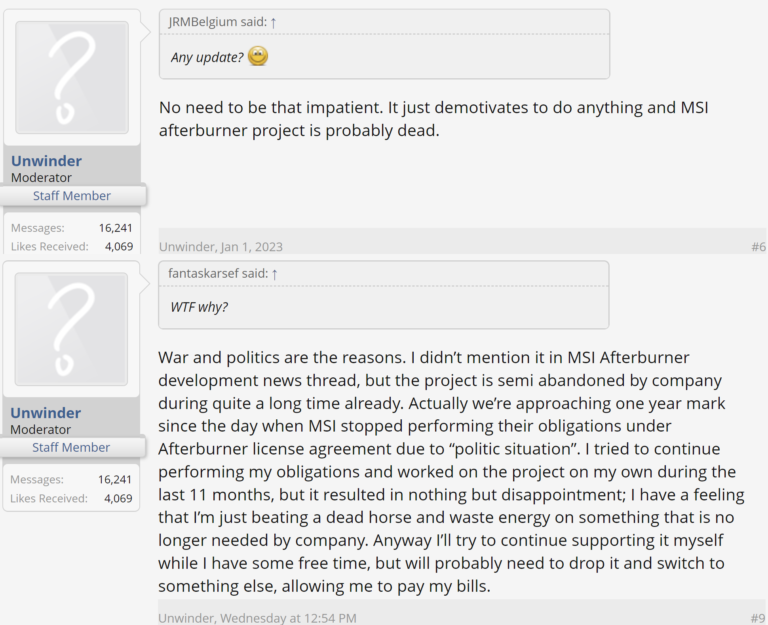 MSI Afterburner is one of the most popular discrete GPU overclocking tools. The program is a spiritual successor to RivaTuner, which has been used for GPU overclocking for many years. Users may find it difficult to find a replacement that supports all GPU vendors natively. Most brands now include their own monitoring software and simple overclocking that also controls GPU functions such as controlling lighting or fan speeds. MSI also has a tool called MSI Center.

Worth noting is that MSI still officially lists the software for its newly released GPUs, including the RTX 4070 Ti. The program’s popularity means that scammers try to take advantage of it by releasing cloned apps that contain malware. MSI is well aware of this fact and continues to point out that the official source for the software is still MSI’s website. The following tweet was posted in November, after several months of failing to fulfill Afterburner’s licensing obligations: 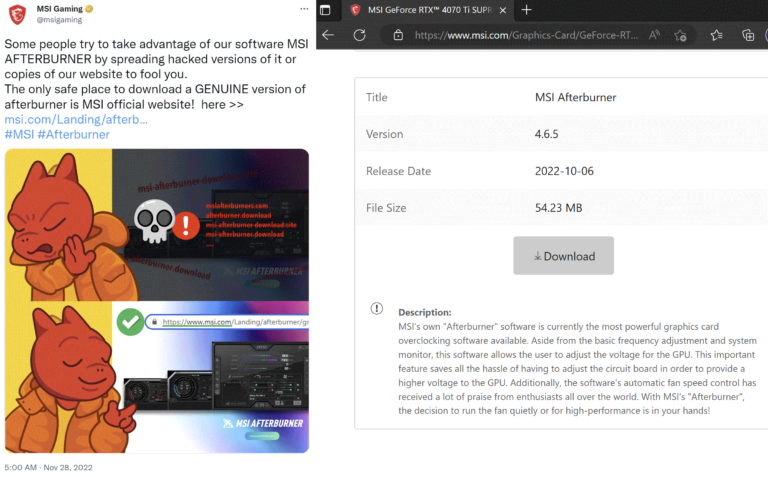 The only good news is that RTSS (RivaTuner Statistic Server) is not an MSI tool and therefore is not affected by the penalties. This statistics and overlay software has and will continue to be fully supported by Alexey. However, third party software that uses RTSS should not be affected.

Alexei assures that he will continue to support the Afterburner project during his spare time, but this is not the full support many of us would prefer. It is important to note that penalties may not be limited to financial compensation but also access to experimental hardware, essentially stagnating or completely preventing the development process.

The comeback is finally coming to the PC platform